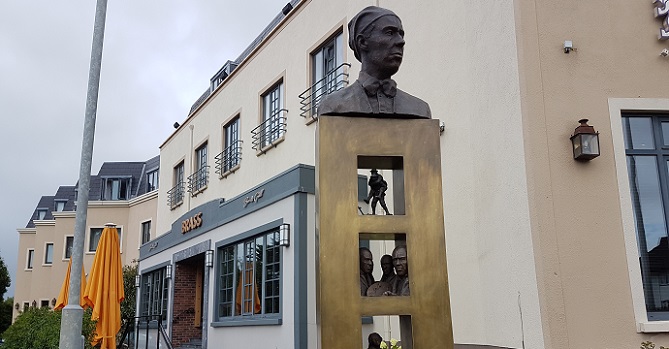 Rolling Stones’ Ronnie Wood unveiled a sculpture of Sir William Orpen, as part of commemorations to honour the late artist, at the Tabolt Hotel Stillorgan this September.

Orpen, who was born in 1878 in Stillorgan and is famed for his self-portraits and his work as a war artist during World War I, has been recently honoured and remembered in his home town with a weekend of commemorative events which took place earlier this September at the Talbot Hotel Stillorgan. The celebrations kicked-off with fitting pomp and ceremony on Saturday 15th September, when famed Rolling Stones rocker, Ronnie Wood, unveiled a specially-commissioned bronze sculpture of Sir William Orpen outside its brand-new home at the Talbot Hotel Stillorgan. Wood, a talented artist in his own right and an avid collector and appreciator of Orpen’s work, officially welcomed the creation to the South Dublin town, bringing years of planning and fundraising on the part of the Stillorgan Chamber of Commerce to a successful close.

Irish sculptor Rowan Gillespie is the man behind the striking bronze piece. Famous worldwide for his work with bronze casting, Gillespie took inspiration for the bust of the impressive, 11-foot-tall sculpture from one of Orpen’s famous self-portraits. The smaller, but incredibly detailed bronze sculptures that make up the base of the piece were also inspired by four other notable works by the Dublin artist, including the ‘Dream’ sketch that influenced the original thought process behind the entire project. Gillespie, whose large and renowned body of work includes the commemorative ‘Famine’ installation at Custom House Quay in Dublin, will be present at the special event as his latest work of art is finally unveiled to the public.

Following the unveiling of the sculpture at, a World War I concert took place in the Talbot Hotel Stillorgan, and featured performances from well-known musicians such as Paul Harrington, Paddy Cole, Zena Donnelly, The Park Singers, the French tenor Damien Top, Cormac Breatnach, Carmel McCreagh, Flo McSweeney and Fiachra Trench, who also happens to be the grand-nephew of Sir William Orpen. The second day (Sunday 16th September) of the celebrations at the Talbot Stillorgan were equally as captivating for Orpen fans, with an art exhibition featuring a selection of the artist’s work on display from 12-6pm, while Dominic Lee, Project Manager of the William Orpen Weekend and coordinator of www.sirwilliamorpen.com delivered a presentation entitled ‘The Life and Times of William Orpen’.

Speaking ahead of the event, Mr Lee expressed his excitement at what was set to be a memorable weekend for both fans and family of the late artist, saying:

“The realisation of this project is down to the unfaltering dedication of the Stillorgan Chamber of Commerce, Rowan Gillespie, the team at the Talbot Hotel Stillorgan and those that donated generously to the fund. On a personal level, the project has been incredibly dear to my heart, so to be able to honour one of our most beloved artists after years of planning and preparation will be a wonderful feeling.”

“While it will be an enriching experience for many of William Orpen’s fans, it will also be a once-in-a-lifetime weekend for almost 40 members of the Orpen family, who will travel to Stillorgan especially for the event. It will be an opportunity for both direct and indirect descendants of the artist, many of whom have never before met, to connect and bond under the watchful eye of Rowan Gillespie’s stunning tribute.”