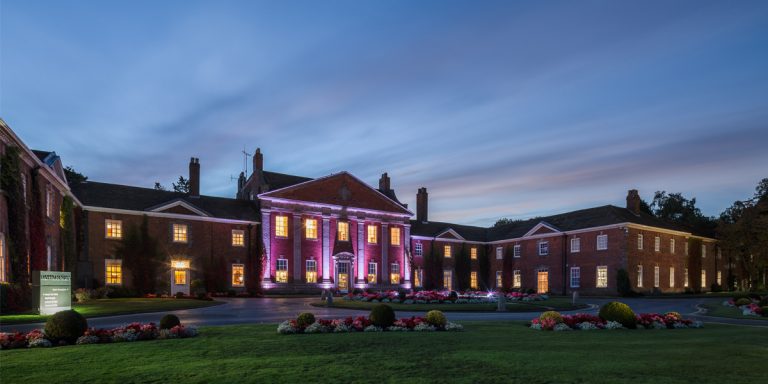 The UK’s leading spa resort group Champneys announce its purchase of Mottram Hall in Cheshire.  The addition of the 18th-century Grade II-listed Hotel and Spa is the latest addition to the Champneys Group’s expanding portfolio of properties.

Champneys, owned by Dorothy and Stephen Purdew, has purchased Mottram Hall from real estate investment company Aprirose. The asset was previously part of the QHotels portfolio. Champneys are planning a £10 million refurbishment programme, including a £5 million redesign of the hotel’s current spa facilities.

The redevelopment will include a 20m swimming pool, new wet and thermal experiences, plus the addition of 18 new treatment rooms.  There are also plans for new conference facilities, an extension to the club house on the Championship golf course, and an increase in the number of bedrooms from 120 to 150. Work is due to be completed by the end of 2019.

“Mottram Hall gives our brand a broader geographical spread with a presence in the North-West.  It’s a fantastic property and we’re delighted to be adding it to our collection of properties within the Champneys Group.  We’re now planning a considerable investment project which will take place over the next year.”

Champneys current properties are primarily based in the south of England, with four spa resort locations at Forest Mere, Henlow, Springs and Tring; six city spas in the South East; along with its hotel and spa at Eastwell Manor in Kent and spa on the Marella Explorer cruise ship.

“Mottram Hall is a property I know well from my De Vere days, and a hotel that Stephen and I put on our radar four year ago.  It’s our ambition to make Mottram Hall the number one destination hotel and spa resort in the North West.”

“It has been a pleasure working with the team at Champneys. Mottram Hall is a fantastic asset which they will no doubt evolve to the next level.  We look forward to developing our relationship further with Champneys in the future.”

Built in 1721 by Nathaniel Booth, Mottram Hall was converted into a hotel in 1940. The property has been owned since the mid 1970’s to 2014 by the De Vere group and underwent a £6million refurbishment during 2012/2013. In November 2014 QHotels secured ownership of Mottram Hall.

“The hotel has a strong reputation in the region as Cheshire’s finest golf resort. I’m delighted the investment from Champneys will allow us to strengthen our offering and continue to position Mottram Hall within the luxury spa market.”

Mottram Hall was then bought and converted into a Hotel in 1940.  Following considerable additions the site now incorporates 120 bedrooms with Spa facilities and a Championship 18-hole golf course.  The tree fringed lake, lawns and rose gardens at the rear of the Hall provide the perfect setting for wedding and outdoor functions.  The formal gardens are surrounded by two hundred and seventy acres of parkland and create a restful atmosphere for conferences and leisure guests.

The Hall is a fine example of architecture of the period and fine ceilings in the main hall and the other public rooms are classed as works of national importance.  These ceilings are now protected as the Hall is a listed building.  The conversion to a hotel necessitated many repairs, renovations and restorations, and a great deal of care was taken to preserve the Adam ceilings and the 12th Century wood panelling, taken from the Old Hall.

Mottram Hall has been owned since the mid 1970’s to 2014 by the De Vere group and underwent a £6million refurbishment during 2012/2013. In November 2014 QHotels secured ownership of Mottram Hall.

The Champneys name has been synonymous with health and wellbeing since the opening of its doors in 1925; and is the UK’s first original health spa. Few spas can claim the heritage and traditions inherent in the Champneys brand.

Since those early days, Champneys has been driven by the simple belief that lasting beauty is more than just skin deep. Champneys was founded on the philosophy that health, beauty and wellbeing are inextricably intertwined; and its pioneering concepts have inspired generations.

Champneys has four spa resorts – Tring, Henlow, Forest Mere and Springs, six City Spas in the South East, an International College of Health and Beauty, a range of globally recognised products, Eastwell Manor – Champneys Hotel and Spa in Kent and a spa on board the Marella Explorer cruise ship.